In probably one of the worse attempts by the persecutor to cry out persecution, the Mormon Church ( The Church of Jesus Christ of Latter-day Saints) has released three videos and a public statement asking members to force their religion from personal practice to public policy.

In the third, and longest, video, they finally attempt to explain how they are being persecuted.  The argument boils down to this:

1) While working for a hospital necklaces are not allowed by nurses for their own safety due to the possibility of patients reaching out for something and accidentally choking the nurse.  One nurse happened to have one which has a crucifix and it was also ruled as not being allowed, but she could wear it under her clothing.  Although wearing a crucifix is not considered essential to her religion and she can still practice her religion, our religious freedom is threatened.[1][2]

2) The school has a non-discrimination policy which requires that members, including leaders, cannot be restricted based on religion.  Since we want to require our leader to be our own religion our religious freedom is threatened.[3][4][5]

3) We take taxpayers money, but we do not want to support legal acts that taxpayers can do, which have been validated and prescribed by physicians, because we disagree with it, although there is no way of knowing all the details of this particular situation.  Since we are being forced to give medication prescribed by doctors to patients that are asking and fully capable of making the choice themselves we are being persecuted and our religious freedom is threatened.[6]

4) We're blind and can't see the bigotry in denying service to other humans just because of their sexual orientation, and lack the capacity to see how this relates to civil rights similar to the 60's, we should be allowed a special exemption from the same law that would protect us in the case that someone would want to deny us service based on our religious convictions.  Because we're too bigoted to keep our big mouths shut when we deny service for any reason, we tell them specifically it is due to their sexual orientation and then cry foul when the state hits us with a penalty for violating anti-discrimination laws, our religious freedom is being threatened.[7][8][9]

Most of these cases which are referenced have been overturned, the schools have backed down on their decision to enforce non-discrimination, a federal judge has ruled against Washington State's requirement to provide emergency contraceptives, and a hospital worker can now wear a crucifix which might spread infection.

Importantly we should note that these same messages are coming from the group which pushed the bounds of separation of church and state when they funded legislation to revoke rights given to the LGBT community in California.

The religious need to realize that the very laws which they try and enact today while they are in power, while they enjoy the majority, may be the same laws which are used to suppress them as that majority dwindles and their power fades.  It is in their best interest to fight for non-discrimination, to build a society which does not force others to go elsewhere if they want service due to personal beliefs and convictions.  As a part of the current majority they share in the obligation to defend those too weak to defend themselves and to not abuse the position which they hold.
[1]http://www.telegraph.co.uk/news/religion/6209892/Nurse-faces-the-sack-for-refusing-to-take-off-her-cross.html
[2]http://www.theguardian.com/business/2013/jan/15/landmark-victory-ba-cross-work 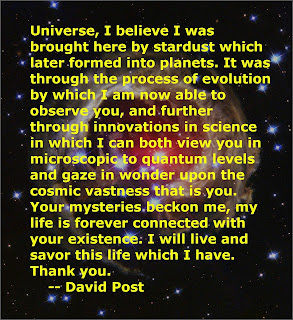 This hardly does justice to the numinous feelings that I have as I learn more about the universe.  Gazing at images taken by the hubble and other telescopes one cannot help but to feel the transcendence that it brings.  As one ponders the vastness of the cosmos and the journey which each atom inside our bodies had to go through to be here in us right now it is one of the most humbling thoughts.  As Lawrence Krauss said, "The stars died so you could be here today."
Posted by Unknown at 5:00 AM No comments: