Article can now be found at OhYongHao.com
This is going to be sort of my second unboxing (although during my first unboxing of my new XDs I didn't take any pictures, but I'll leave it up to you to decide if it counts or not).  I was not originally going to be purchasing a Kindle Paperwhite

so soon, but unfortunately about a week after the announcement by Amazon of the Kindle Paperwhite coming out my Kindle Keyboard was stolen.  I had had it for just over a year.
To be honest, I think that the name is hard to pronounce and doesn't quite roll off the tongue.  The first time I saw it was in a Google News link and I thought it was an article that was criticle of the Kindle and calling it a Paper "weight".  Since then I have to catch myself everytime I want to say Kindle Paperwhite because I almost always try to say paper weight. 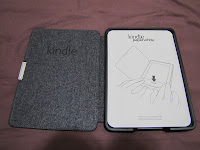 first around October 3rd.  It was exciting to see about what size the Kindle would really be.  One disappointment is that although it is a "leather" cover, it appears to be a thin layer of leather on the outside with denim on the front inside and a plastic mold where the Kindle sits.
The only identifying marks on the outside cover is the magnet on the right side which is silver in color and has the Kindle logo engraved.  Whereas the inside cover has a large font Kindle stuck on it that resembles a sticker.
I'll talk a bit more about the cover after we've unboxed the Kindle Paperwhite. 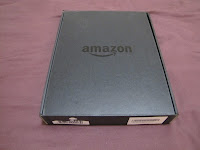 After nearly a month of waiting my Kindle Paperwhite arrived by UPS.  It was in a slick thin box with the Amazon Frustration Free Packaging.  I tore it open at first opportunity, then remembered I wanted to take pictures for this blog.
As noted on the Amazon website this Kindle does not come with a wall adapter (also known as a wall-wart).  That being said, it does come with a USB cable.  The standard extra long Amazon USB cable.  Still having the one from my previous Kindle before it was stolen, I probably won't be using this one until I find a place where I need to be charging something that I don't already have a cable, but it's not quite as dramatic as I thought when I first read that it didn't come with the adapter.  For those that were worried, you'll still be able to charge it with any other USB adapter or computer that has a free USB port. 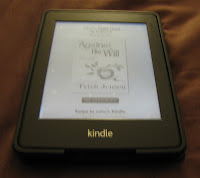 My first impression was the bevel was bigger than I was expecting, which I consider to be a good thing.  Some other bloggers had mentioned that the bevel was much thinner and some of them had trouble holding it, especially since now touching the screen is forbidden unless you want to turn a page or access the menu.
The Kindle, I find now, is thin enough to fit inside my coat pocket, either on the outside hand pockets, or on the inside pocket of my leather jacket.  With the hand pocket it still sticks out slightly, so at best it can be put there quickly to get out of the rain, but I find that I enjoy storing it in my interior pocket, something that my previous Kindle could never do due to the size.  This is also including the leather cover that I mentioned above.
The cover fits snug, your Kindle Paperwhite will just snap into place and it doesn't feel like it's going anywhere.  With the conspicuous magnet on the right side you also don't accidentally try opening your Kindle the wrong way and damage it because of the electrical connections for your light.  A really nice feature is how the cover works similarly to the iPad cover where closing the cover turns off the device.

I got the device with Special Offers and the one downside to this is that there is an extra swipe that needs to be done to open your device.  A friend of mine paid the extra $20 to not have Special Offers and with his device you barely catch a glimpse of his screen saver before you are brought back to the last page he was reading.  This is done, I believe, so that people actually see the ads, because otherwise you would only catch a small glimpse before they disappear.  That being said, I don't really find the ads to be very distracting.  Although it should be noted that the ad also appears on the homepage on the bottom, making the covers slightly smaller than if you did not have Special Offers.
Most of the offers I have gotten are 30% off some item, or 80% off a featured book.  I haven't used any yet, they seem to come just after I bought the item they are advertising.  For example, I had just bought two pairs of jeans from Kohls when I got the 30% off denim advertisement   I also got a 30% off Kindle Accessories, which having already bought the leather cover, was completely useless. 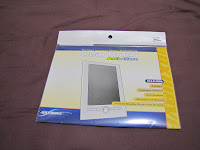 I was never the geeky guy with glasses taped together and a pocket protector to fit, but I have found that I enjoy having that added protection that screen protectors bring on all my electronic devices.  I particularly recommend the BoxWave Kindle ClearTouch Anti-Glare Screen Protector

.
Application is pretty straight forward, just don't mess it up the first time.  The screen protector feels natural, there will be a few bubbles for the first few days but should work themselves out.  One important note is to try to work in a dust free environment because any specs of dust that you get underneath it will be stuck there for life.  You can attempt to reapply, but, ahem, from my experience that usually just ends up in more dust.

I got to admit, I was in the middle of an awesome quadrilogy and was looking forward to diving right in.  Turning on the Kindle for the first time brought me to a tutorial on how to use the Kindle with no clear way of forgoing the tutorial.  I was stuck and had to do all the page taps before I could begin enjoying my book.  It felt like it took a little longer than I would have liked.  There also doesn't seem to be a way to restart the tutorial, but there is the Kindle's User Guide which you could read through later, or Google.
After starting you'll have to connect to a WiFi Hotspot in order to connect to the cloud and begin to get your books loaded.  I found that navigation in the book was really simplified, just a couple taps of the screen and I was able to find my place in the book that I had left off at with my friends Kindle.  In order for the reading progress to work I found that you have to switch it to one of three choices:

By far I find that "Time left in chapter" is the best option.  If you tap at the top of the screen and have the menu available you can see all three at the bottom of the screen anyways, and the one I want to know most often is how much is left in this chapter.  It doesn't take long for it to start working.  I wish that these options were able to be checked on or off and rotate through them, although I would still find the location one not very useful unless you were trying to match up exactly with a reading partner.  What I find is, for the most part, we just sync up on chapters anyways.

Quite honestly I haven't used this feature yet, not from lack of trying, but mostly from its inability to queue shares until I have WiFi access again.  To me this is a great oversight that Amazon really dropped the ball on.  I take my Kindle everywhere with me, whether it be the grocery store, beach, work, or hiking up a mountain.  My daily commute to work gives me about 1-2 hours of reading time.  I have thought about syncing it with my Android Hotspot, but that still doesn't work with hiking/camping or other places where I don't have reception.  I think it would be nice to write the share and then have it queued up until I make my next connection.  I've found myself actually wanting to use it a couple of times, especially since I usually have some friends reading the same book.

After the First Week

Now that the novelty of the Kindle Paperwhite has worn off I still find myself in love with my new Kindle.  Because of its convenience of fitting in my coats interior pocket I pretty much never find myself without it.  Opening up with the new cover means I can be reading within seconds, and when I need to put it away it shuts off as soon as I close the cover which means I'm not going to accidentally turn the page.
I have to admit, when I first heard that they got rid of the page turn buttons I was upset, I thought it was the dumbest thing they could have done.  Audio jack, never really used it, but the page turn buttons I had grown accustomed to.  Most of the time I find that I hold the Kindle in my left hand and had found a very comfortable position that allowed me to turn the page with an almost unnoticeable twitch of my hand.  After having used the Kindle Paperwhite for the last week I find that I do miss the ability to gently turn the page with my left hand, if Amazon would add a Left Hand Mode for their screen tap area that would probably make up for it, or possibly make the turn back section only take up the top half of the left side and leave the bottom half for turning forward.  The only other complaint is once in a while I accidentally activate the menu by tapping too high, usually with my right hand.
Overall it is a really well made product, I haven't had any complaints from my wife about the glow while I'm reading with the lights off.  A different review had mentioned they like to read with the light on 100% the entire time, I find that I enjoy it more either having it off or on up to about level 6 for night time reading.  To me the full brightness makes it seem too much like an LCD screen that I hated reading before I got my Kindle, it just feels like too much light being directed towards my eyes.

My final thoughts, I would recommend this to anybody who loves e-readers, or to anybody who was hesitant to switch from dead tree books.  This is one purchase which will bring a lot of enjoyment to your life.

Email ThisBlogThis!Share to TwitterShare to FacebookShare to Pinterest
Labels: kindle